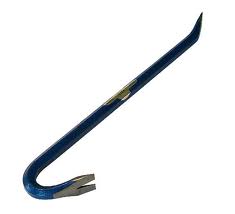 Crowbar is a tool consisting of a metal bar with a single curved end and flattened points, often with a small fissure on one or both ends for removing nails.

It is used as a lever either to force apart two objects or to remove nails. Crowbars are commonly used to open nailed wooden crates. Common uses for larger crowbars are: removing nails, prying apart boards, and generally breaking things. Crowbars can be used as any of the three lever classes but the curved end is usually used as a first-class lever, and the flat end as a second class lever. In mining, crowbars are used to break blasted rocks and to remove loose rock on roof sides and the working face, but not much in modern mining

Normally made of medium-carbon steel, they can alternatively be made from titanium, which has the advantages of being lighter and nonmagnetic.
The least expensive, most common crowbars are forged from hexagonal, or sometimes cylindrical stock. More expensive designs may be forged with an I-shaped cross-section shaft.