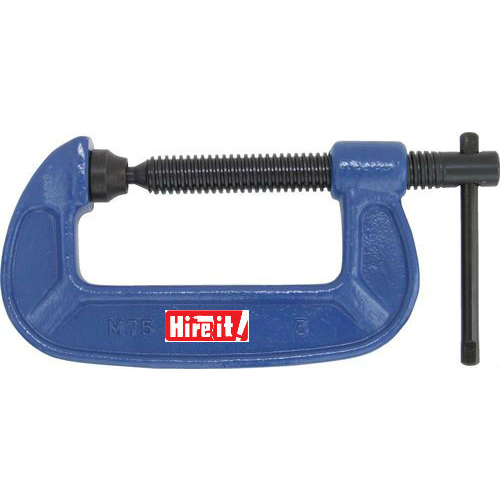 G-Clamp is a type of clamp device typically used to hold a wood or metalwork piece, and often used in, but are not limited to, carpentry and welding. These clamps are called "C" clamps because of their C shaped frame, but are otherwise often called G-clamps or G-cramps because including the screw part they are shaped like an uppercase letter G.

G-clamps are typically made of steel or cast iron, though smaller clamps may be made of pot metal. At the top of the "C" is usually a small flat edge. At the bottom is a threaded hole through which a large threaded screw protrudes. One end of this screw contains a flat edge of similar size to the one at the top of the frame, and the other end usually a small metal bar, perpendicular to the screw itself, which is used to gain leverage when tightening the clamp. When the clamp is completely closed, the flat end of the screw is in contact with the flat end on the frame.[2] When the clamp is actually used, it is very rare that this occurs. Generally some other object or objects will be contained between the top and bottom flat edges.

A G-clamp is used by means of turning the screw through the bottom of the frame until the desired state of pressure or release is reached. In the case that the clamp is being tightened, this is when the objects being secured are satisfactorily secured between the flat end of the screw and the flat end of the frame. If the clamp is being loosened, this is when a sufficient amount of force is released to allow the secured objects to be moved.