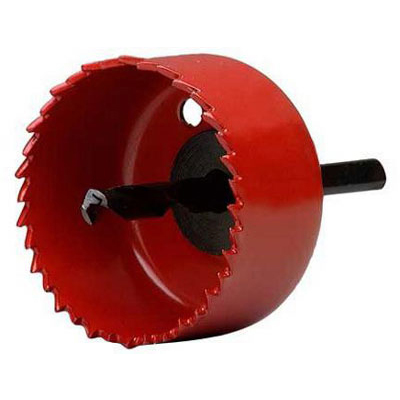 Hole saws are used to bore holes in brick, wood, concrete and glass .Hole saw is used in a drill. It typically has a pilot drill bit at their center to keep the saw teeth from walking.

A hole saw (also styled holesaw), also known as a hole cutter, is a saw blade of annular (ring) shape, whose annular kerf creates a hole in the work piece without having to cut up the core material. The fact that a hole saw creates the hole without needing to cut up the core often makes it preferable to twist drills or spade drills for relatively large holes (especially those larger than 25 millimetres (1.0 inch)). The same hole can be made faster and using less power.
The depth to which a hole saw can cut is limited by the depth of its cup-like shape. Most hole saws have a fairly short aspect ratio of diameter to depth, and they are used to cut through relatively thin workpieces. However, longer aspect ratios are available for applications that warrant them.

Cutting with a hole saw is analogous to some machining operations, called trepanning in the trade, that swing a cutter analogous to a fly cutter in order to achieve a similar result of annular kerf and intact core.