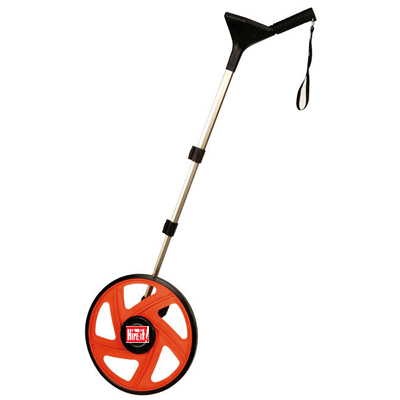 The measuring wheel is a measuring device. It is commonly used by people who need an easy way to find the rough distance from one place to another

The origins of the measuring wheel are connected to the origins of the odometer. While the latter is derived to measure distances travelled by a vehicle, the former is specialized to measure distances. Much of the material on the earliest stages in the development of the hodometer is adequately covered in odometer.
In the 17th century, the measuring wheel was re-introduced and used to measure distances. A single wheel is attached to a handle and the device can be pushed or pulled along by a person walking. Early devices were made of wood and may have an iron rim to provide strength. The wheels themselves would be made in the same manner as wagon wheels and often by the same makers. The measuring devices would be made by makers of scientific instruments and the device and handles would be attached to the wheel by them. The device to read the distance travelled would be mounted either near the hub of the wheel or at the top of the handle.

It works by having a wheel which has a circumference of exactly 1 metre, hence one revolution of the wheel equates to 1 metre of distance travelled on the ground if there is no slip. Every time the wheel makes a rotation, the wheel produces an audible click which is then counted and therefore the number of clicks that are counted by the user is approximately the number of metres travelled. Due to the design of the trundle wheel, it is not always moved in a straight line and this inevitably adds on extra distance to the final reading