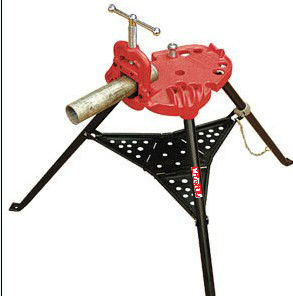 A pipe vice is an apparatus which enables a pipe to be held tightly. Complete with two half-circle jaws, the pipe vice can be tightened to grip a pipe and hold it securely while it is being worked on. Often a feature of a common bench vice, the addition of a pipe vice makes the bench vice an all-purpose tool capable of performing many more tasks. The teeth of a pipe vice are critical in the gripping success of the tool, as rounded or dull teeth allow the pipe to slip and roll even though the pipe vice is tightened.

Certain models of pipe vice contain a linked chain component that is used to grip and hold the pipe. By placing the chain around the pipe and securing it into position on the vice, it is tightened by the vice handle and provides the ultimate in clamping force. The chain's ability to wrap tightly around the pipe instead of simply contacting two sides makes it possible to grip the entire circumference of the pipe, more than quadrupling the clamping surface of the vice.